I am still in Xi’an.  I had the most fantastic day seeing the Terracotta Army and enjoying a fantastic culinary experience.  Now I am walking towards the end of the street when the historical Bell Tower emerges in front of me.  Its is one of the 2 famous towers in Xi’an and they are part of the amazingly preserved (and restored) medieval city defences and wall.

I assume they were built to alert the citizens and the garison for the coming of an enemy or an important visitor.   With National Day coming tomorrow, the towers are spectacularly illuminated and decorated with red lantarns and dozens of national flags.  Truly a magnificent sight !

I walk through an adjacent street towards the second tower : the Drum Tower.  It is equally decorated and impressive.  It stands out in the middle of a roundabout, so it is a bit tricky to get nearby or take a clear picture.

From this point you also have a view on the 2 towers.  It is a fantastic view, a trademark of the city. Especially at night..

I hop on the bus to get back to the hotel.  It is a short drive with only a couple of stops.  From the bus stop it’s another short walk to the hotel.  On the last corner a vendor is selling roasted sweet potatoes in a kind of furnace I had never seen before.  I ask if i can take a picture and the friendly man has no objections and smiles holding up the potato.  I feel obliged to purchase one, and although it smelled great and tasted great, I was too full from Food Street to finish all.

The Giant Wild Goose Pagode is lit up against the night sky and the trees of the large square in front of the temple is are illumonated with colorful lights.

It is a beautiful sight of an historical building, of great importance to Chinese Buddhism.  I decide to quickly walk around the temple.  I wont be around anymore next evening.  On a wall behind the temple the legendary journeys of the famous monk Xuanzang are depicted.

There is nobody at this late hour. Except a lonely foreigner.  There is a golden statue of Xuanzang in front of the temple, with the pagoda in the background.  I take one last picture of the day and head off to bed.

Tomorrow I will visit the temple in the early morning, and i have been told it would be a sunny National Day. 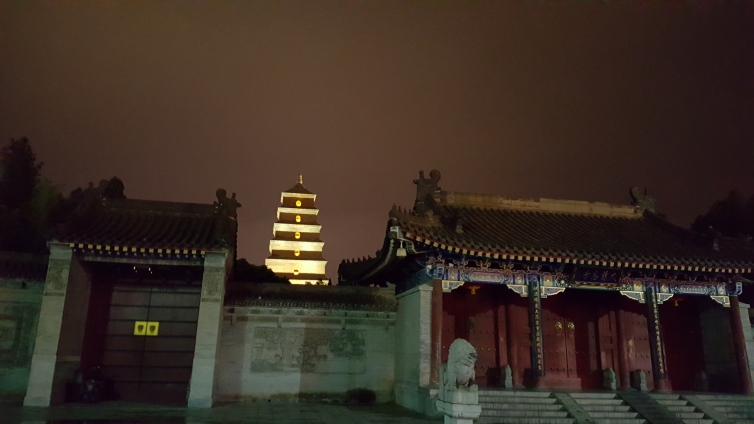 Indeed. The next morning the sun is shining brightly and after a good and proper breakfast I go out to visit the Giant Wild Goose Pagode. 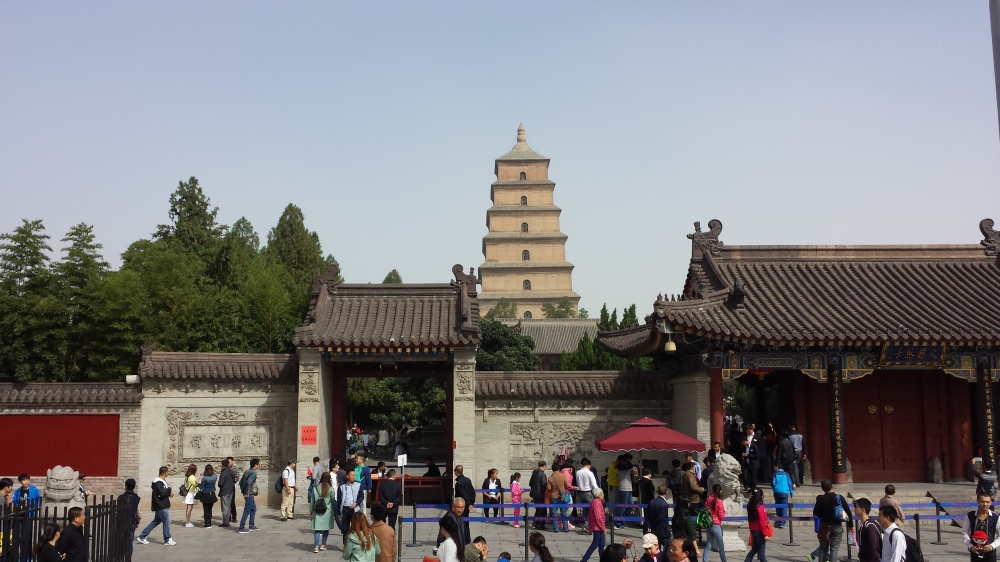 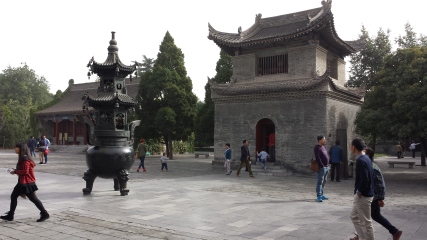 The Pagoda was build 14 centuries ago, and fortunately restored and renovated over the ages.  Today it stands in perfect condition and you can climb all the way to the top to enjoy great views of the city.  At least if you don’t mind climbing up a narrow staircase with tourists going up or down with intervals.

But it is not the hight of the tower or its age that makes this temple so special.  It was here that the young monk Xuanzang was studying Buddhism and decided to travel to India to learn and understand more about the scriptures.  Chinese Buddhism finds his roots in India after all.

His travels and accounts have become famous and were of great influence to Chinese Buddhism. One of China’s 4 Classic novels ‘The Journey West’, written in the 16 century, was based upon his travels and adventures.  You may not know this novel, but everybody knows the fictional character from the book : the Monkey King ! 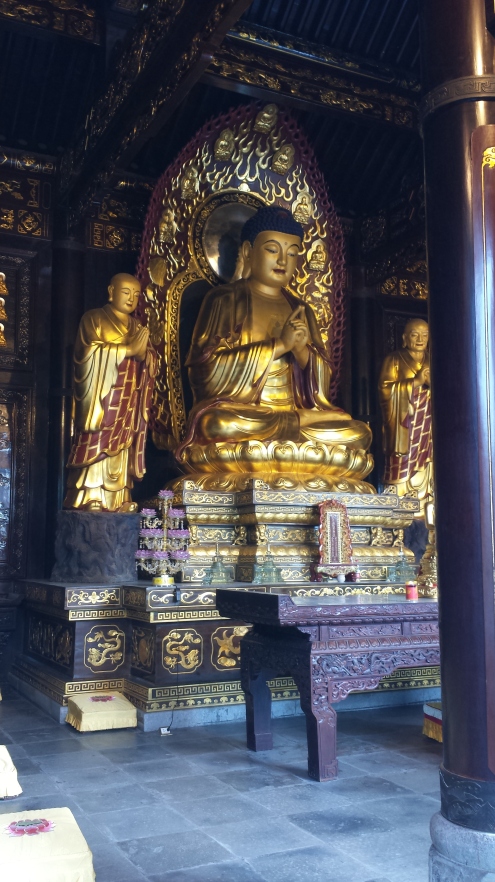 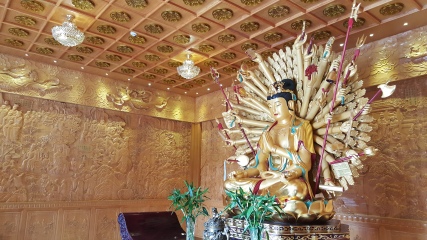 A nice small garden leads back to the entance of the temple.  There is still much to do and see today. 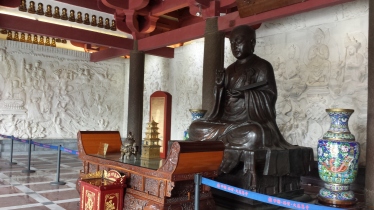 A vendor just is on his way with a load of what seems to be fantastic pastries, but he doesn’t seem to be selling yet.

I walk further down the street to the bus stop past an impressive monument, but my destination is the old city wall and city defenses. 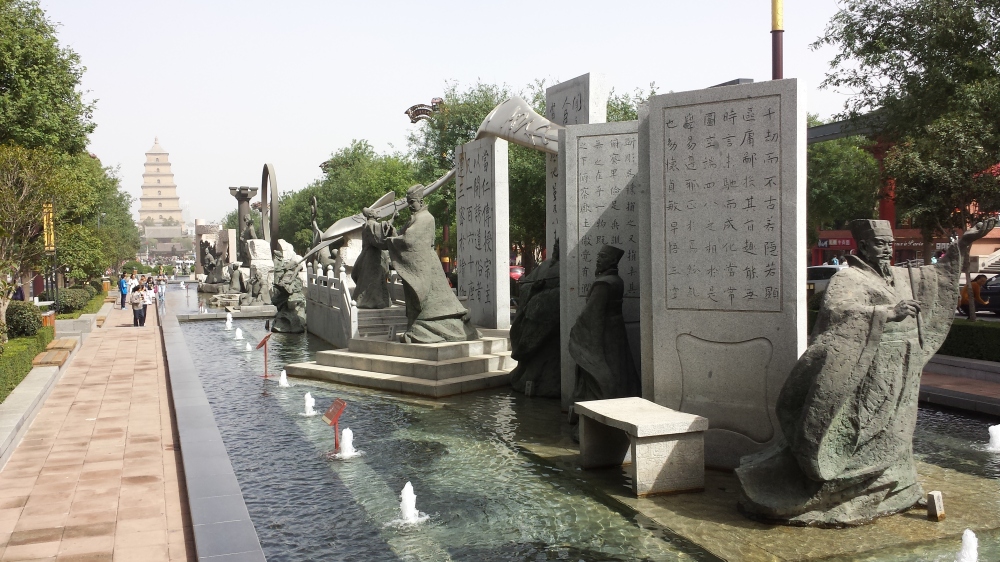 The bus stops nearby the old center and there is the Small Wild Goose Pagoda. As the name already indicates, it is much smaller.  Next to the pagoda is the famous book street of Xi’an. 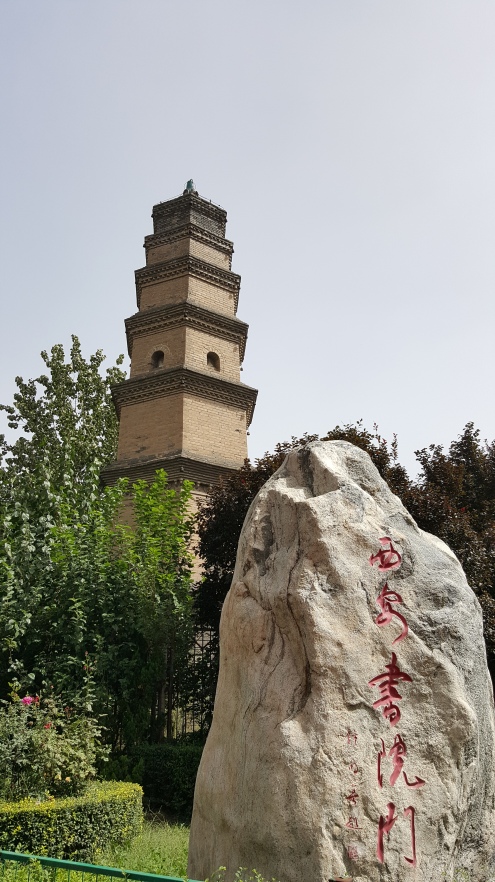 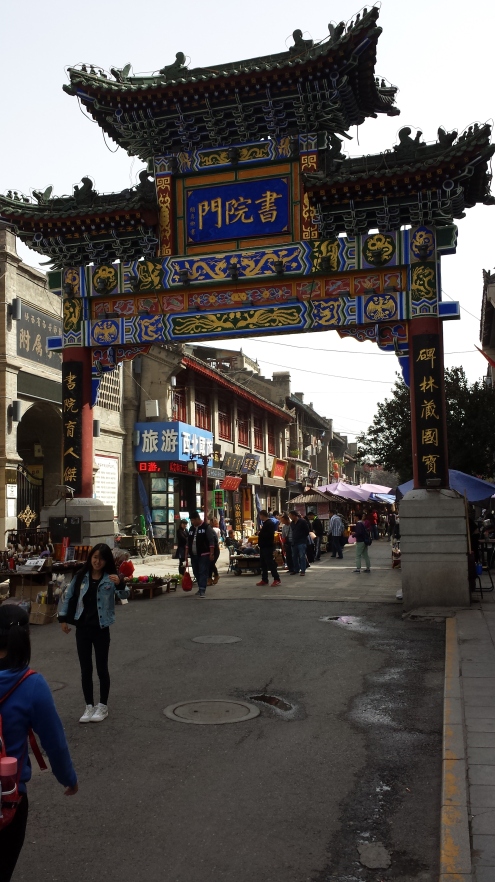 A bit further I see the impressive city walls of Xi’an.  They are immens.  With watch towers and storied buildings at the gates and surrounded by wide moats. All structures seem intact and in perfectly preserved condition.  It was build duringing Ming and Qing dynasties and it is 14 kilometers long rectangular construction of 15 meters wide. 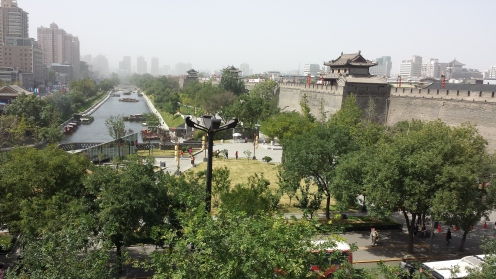 The city walls of Xi’an are in such a good condition and wide as an avenue, that it is possible to rent a bicycle and cycle all around the 14 km of the city wall.  An unique experience ! 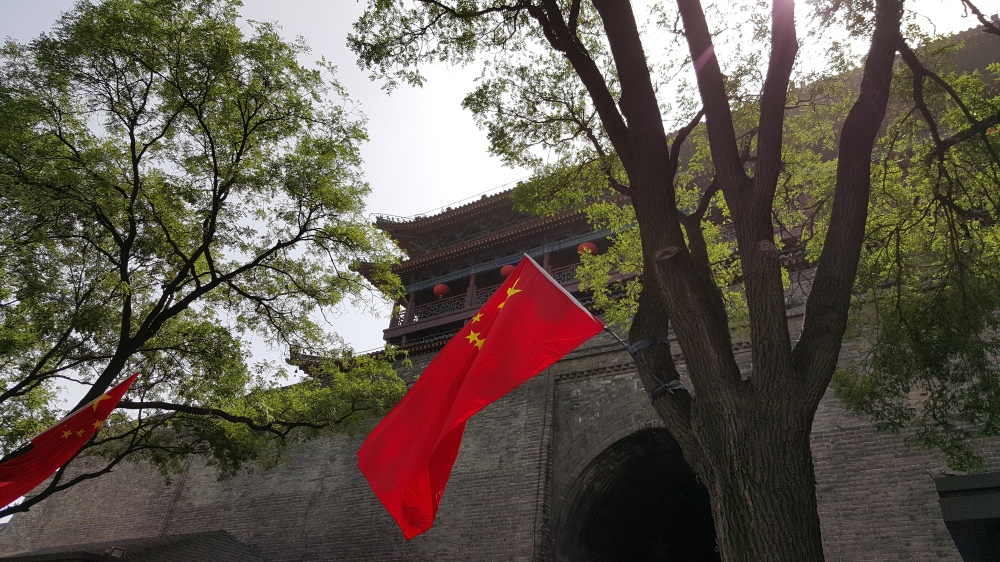 But first I decide to take a little boat trip on the moats ouside the walls to discover the city defenses.  It is a short but pleasant trip that brings you past the impressive fortifications and walls.

Back on shore it is time to climb up the walls.  The park in front the city wall is beautiful and a young married couple os taking wedding pictures on traditional clothing under a wooden archway.

As soon as i am up the wall and look around me I realize that there is no way that i can walk all around the endless city walls.  But no problem.  You can rent one of the hundreds of bicycles that are parked there. 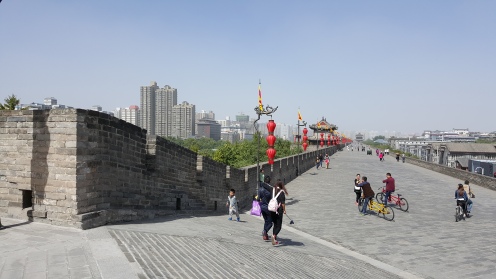 I start my tour around the old city center.  For being National Day, and a holiday for everybody, there are not too many vistors.  Maybe its just a false impression caused by the size of the walls.  I don’t advance as fast as i had hoped for, but that is not the bike’s fault.  It is me stopping for pictures.. 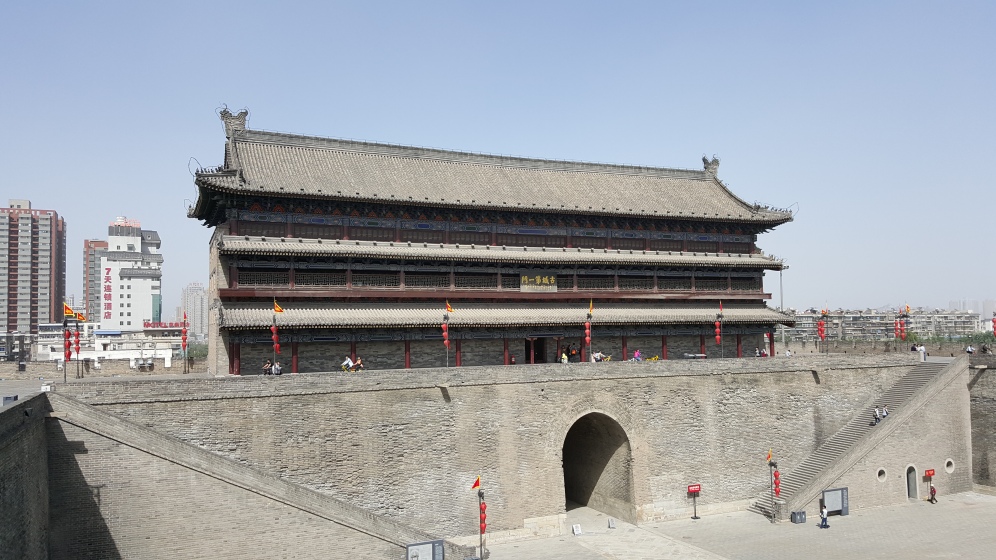 There are watchtowers and guard towers all around, and huge stories buildings overlooking the narrow gates.  Preparations seem on their way to celebrate National Day.  Too bad I can’t witness it.  Must be spectacular with the Xi’an city walls and historic buildings as a background..

After a good ride on the city walls it is time for lunch.  Time in Xi’an is almost over, and although it was short, I really like the city.  I me my way back to Food Street for a quick lunch. 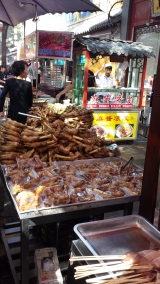 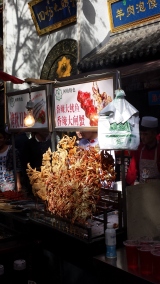 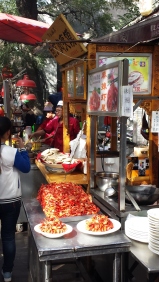 The street looks very different during the day.  And because it is holiday, the street is a sea of people.  I enjoy the busy atmosphere and let myself glide along with the crowd, grabbing a snack left and right. 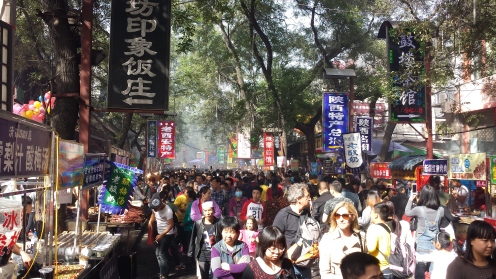 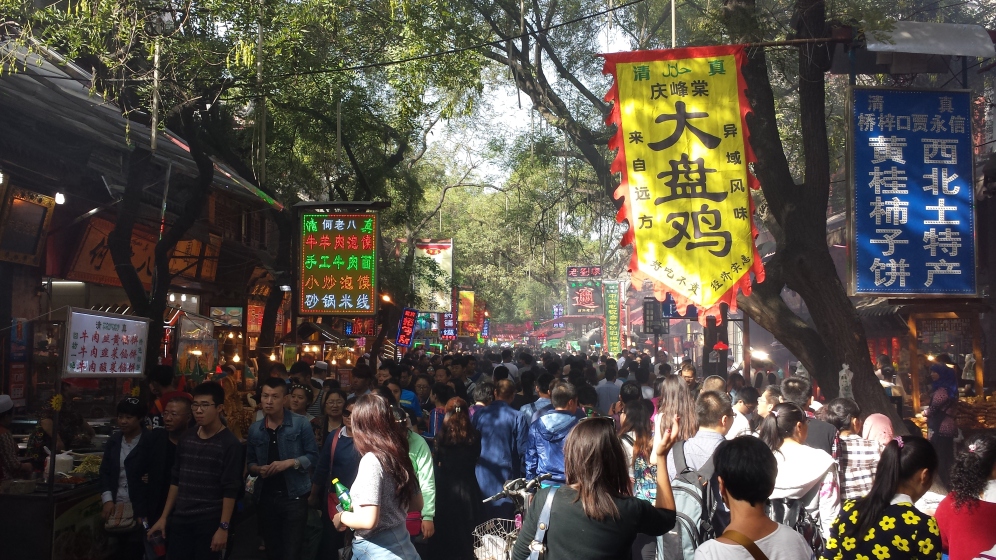 When I reach the end of street, it is time to collect the luggage and go to the airport.  Next stop is Gansu province, where I am going to follow in the footsteps of Marco Polo, and explore the Chinese part of the Silk Road.   An exploration that has in fact already begun, as Xi’an used to be the end of the Silk Road in the East.   Or the beginning, depending on which way you are going…