I am still on my way on the first day of my visit to Dunhuang in Gansu province, but there is so much to see and visit that I couldn’t put it all in one post.   Its is late afternoon and I still have a bit of a drive ahead of me to the unusual rock formations of Yadan National Geological Park.  Locals call it Devil’s City or Demon Town because of the ghostly sounds produced by the wind and the rock formations.

It’s about 200 km from the center of Dunhuang city, and I hope we are still on time to enter and see the sunset.  As we approach the site, I notice that the landscape becomes rougher and rockier. On the right I see some modest mountains appearing on the horizon.  I make it just in the nick of time and catch one of the last shuttle busses that bring the visitors to the different hot spots.

The area used to be a highland, or a plateau, with cracks.  But millions of years of erosion have widened these cracks more and more until the plateau almost completely vanished and eroded into sand.  Wind coming from 1 predominantly direction has caused a directional erosion resulting not only in strangly shaped rocks, but also for the unusual directional arrangement of the rock formations.

As we drive deeper into the park, through rocky valleys and cliffs, the landscape suddenly opens up in front of us, and I witness the grandeur of this strange part of the Gobi desert. 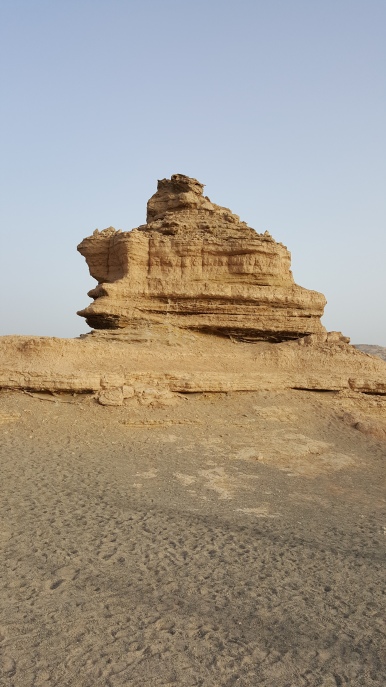 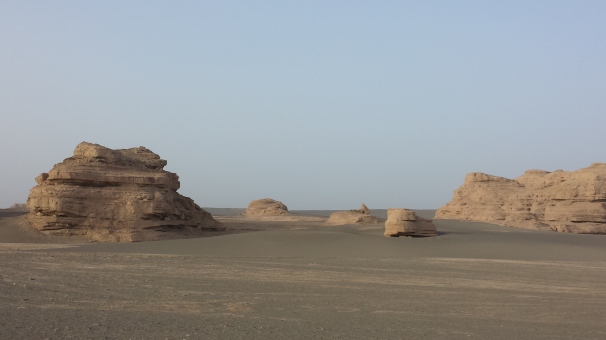 The plateau is mostly gone and what remains is a vast plane of dark, almost black sand as far as the eye can see, with occasionally an irregularly shaped rock still standing. 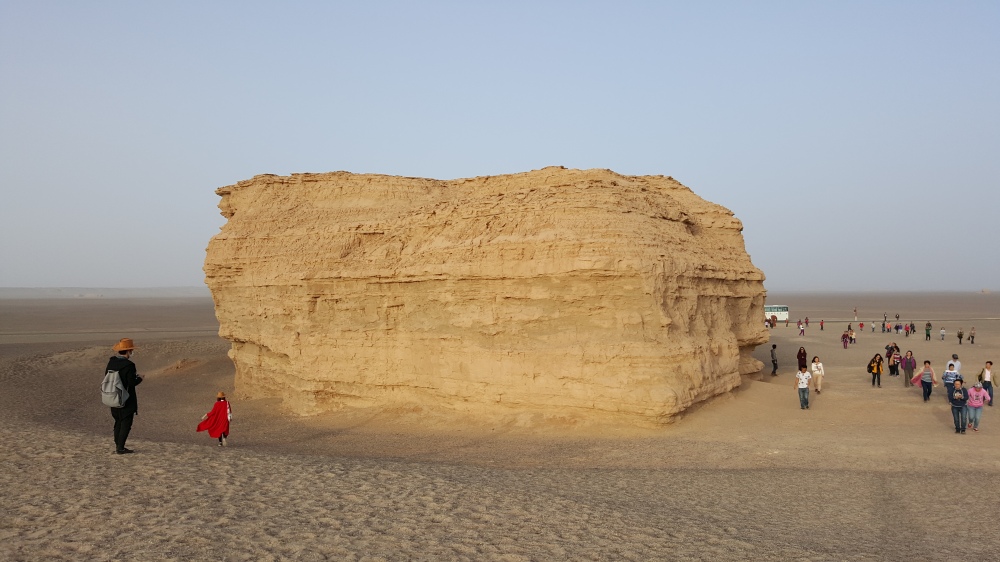 As the sun is setting, the rocks seem to be on fire with an beautiful orange glow. It is a spectacular sight to behold.

Most bizarrely shaped rocks have been given names.  Like the Lion Rock or the Peacock Rock.  The bus stops at the most famous ones and we have a few minutes to walk around and take pictures.

The formations become more and more beautiful as we go deeper into the park. We stop at a large solitary rock that looks just like the sphinx in Egypt. Remarkable. 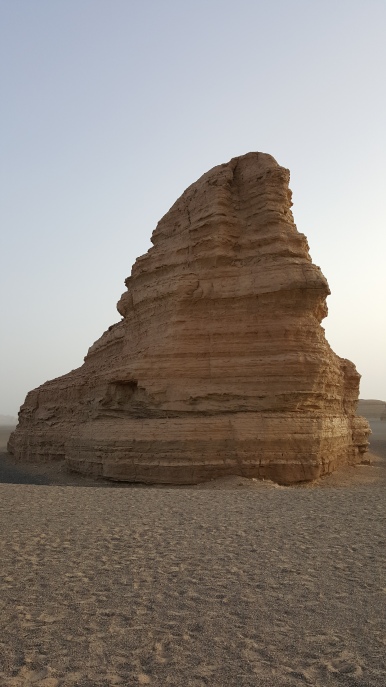 When we arrive at the last stop, the sun is almost down and the light gets poor.  The air becomes a bit hazy.  I am just in time to take a few pictures of the typical parallel arrangement of rocks that is so characteristic for this park.  It is really beautiful in the evening with the brightly and warm colored rocks against the dark sand.

By the time i reach the exit of the park, it is almost dark with 200 km to drive back in town.  I ask the driver once to stop the car so I could gaze upon the million stars in the clear, unpoluted night sky.  I never saw so many stars together. Fantastic ! Like a blanket of tiny bright lights. 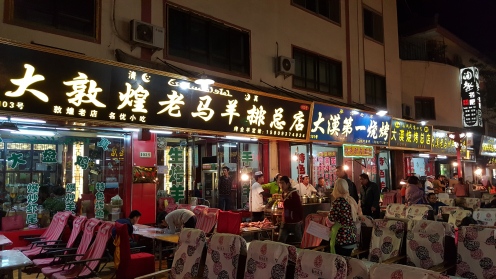 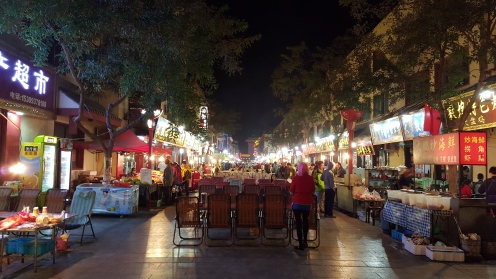 The driver drops me in the city center close to the local food street.  It is already chilly outside so i opt for a small simple place with a few tables inside and a gorgeous smelling barbecue outside.  I am happy with something simple and i enjoy a good selections of roasts to satisfy my hunger after an incredible day. 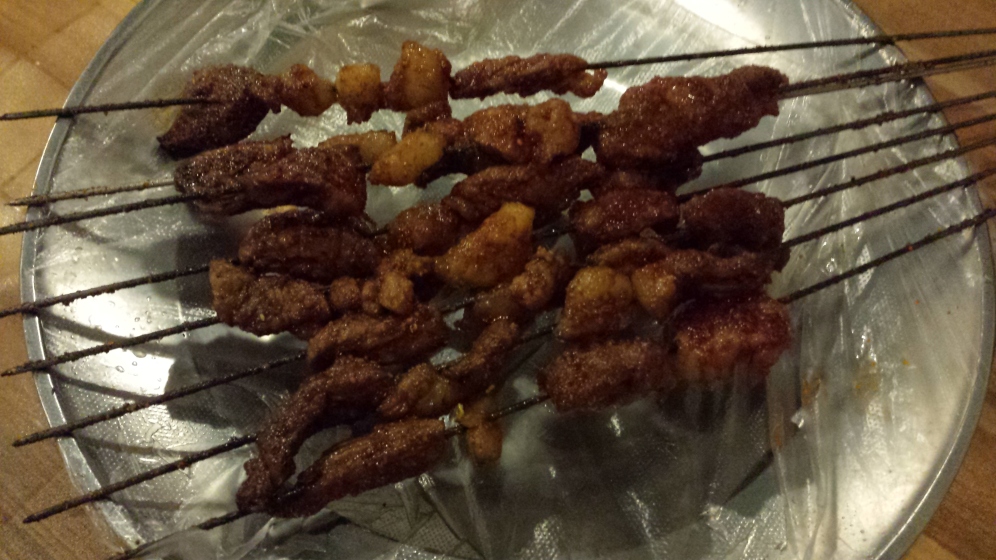 The next morning, after a more than decent breakfast, the driver picks me up again.  Today on the program 2 sights i really wanted to see.  First up are the world famous Mogao Buddha Caves, a UNESCO World Heritage Site.  I had seen a small version yesterday, but these caves are different level. 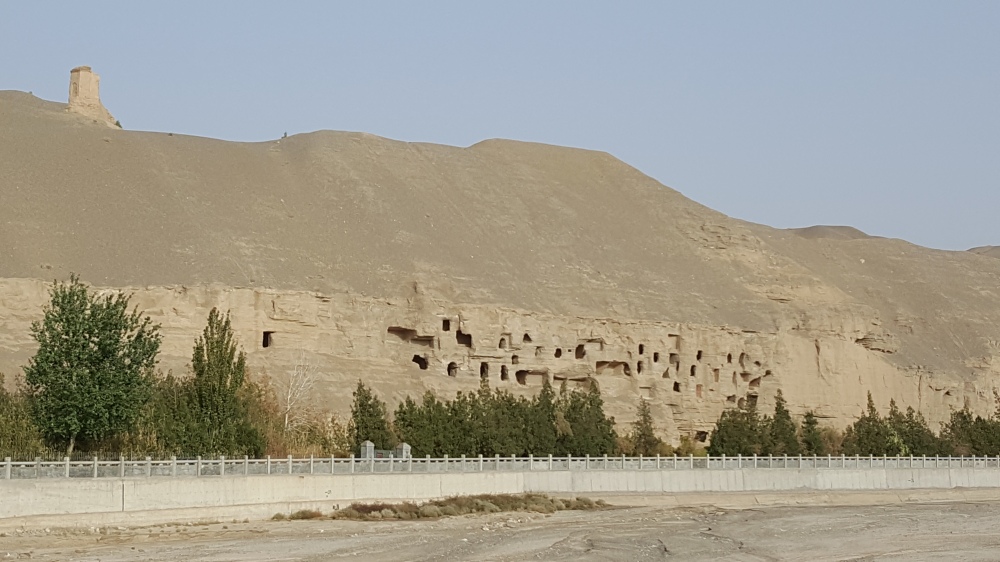 It will be very busy as the site is famous in China and attracts thousands of visitors and Buddhist pilgrims.  It is advisable to get your entrance ticket online several days before your visit.  In fact as soon as possible.  There is only a limited amount of people allowed, and without pre-ordered ticket you risk queuing for several hours.  Besides, vistors with pre-ordered tickets get to see twice as many caves.   Already a sizeable queue is forming when walk towards the entrance early in the morning.

The site is a small valley or rather a depression in the terrain with steep cliffs on either side.  There are hundreds and hundreds of small caves excavated in the rocks to serve as buddhist shrines. The wealthier the person, the wealthier the decorations and the bigger the cave. 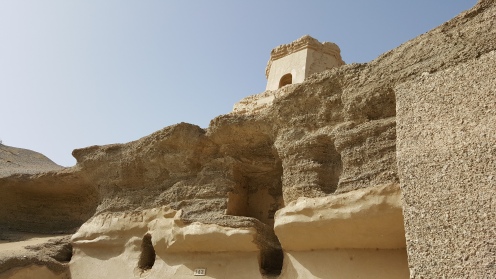 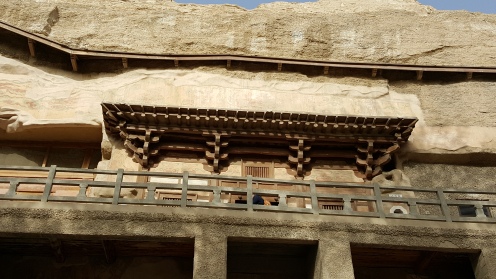 All caves are numbered and only a handful are open to public, and again, not always the same.  The ones I visited were wonderful.  Construction of the first caves was in 366 AC and continued for a 1000 years, leaving a treasure of Buddhist history and religious documents. 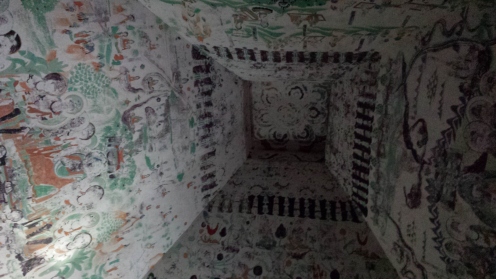 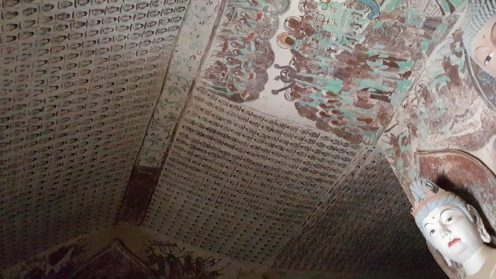 Each cave I visit is more fascinating than the previous one.  They all have different statues, different themes, different purposes, a different story.  It is incredible how this site has grown over a thousand years, only to be abandoned and forgotten for centuries. 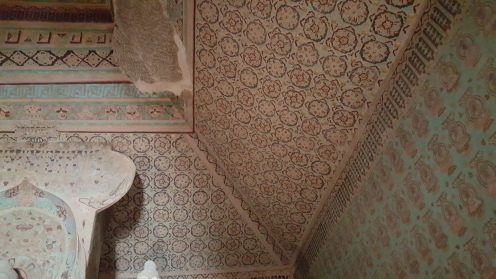 In total I visit 8 caves. The largest ones holding the Giant Buddha are accessible for all. 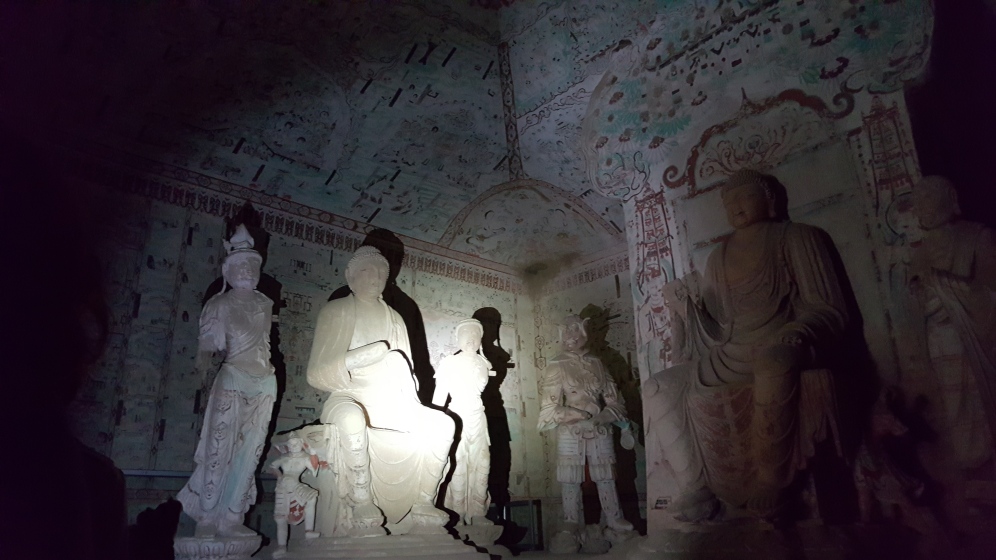 In the middle of the site stand a huge cave with a giant Buddha inside.  A pagoda has been built as a facade to protect the fragile statue inside.  This is the most famous and characteristic view of the site. 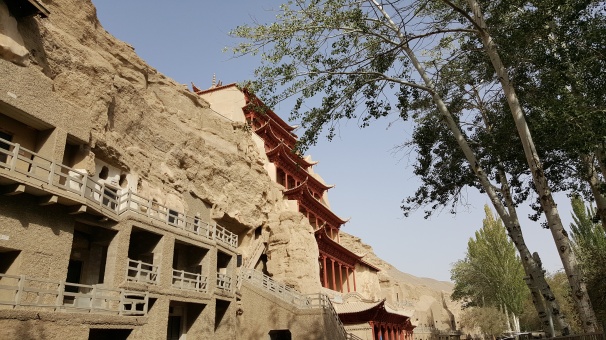 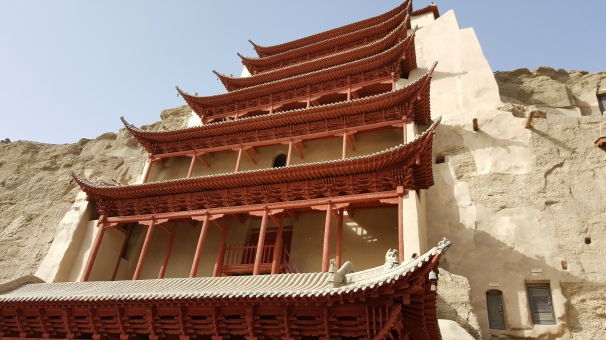 The Giant Buddha inside is beautifully detailed and full of color. 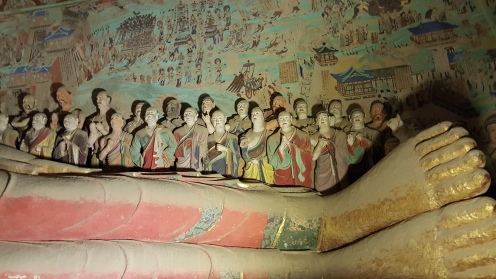 This site is one of the 3 most famous Buddhist Cave complexes in China, and for me it was a fantastic decovery as I learn more and more about local history and Ancient Buddhism. 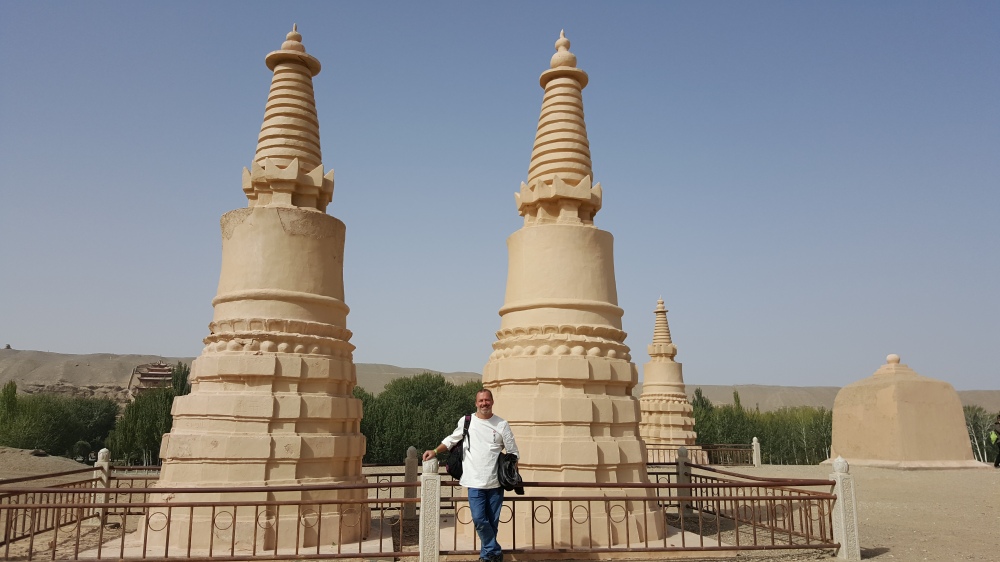 From the caves of Mogao I head to my final place of interest of the day : the fantastic half moon spring.  It’s not that far from the caves and not far out of the oasis of Dunhuang.  It is an incredible romantic place, and bound to be busy. The spring already exsist over a 1000 years and has never dried.  There is a most gorgeous little temple build on the shore of the pond and it is surrounded by huge sand dunes.   I had this place marked high on my bucket list and I was not dissapointed.  It is the most magical place… 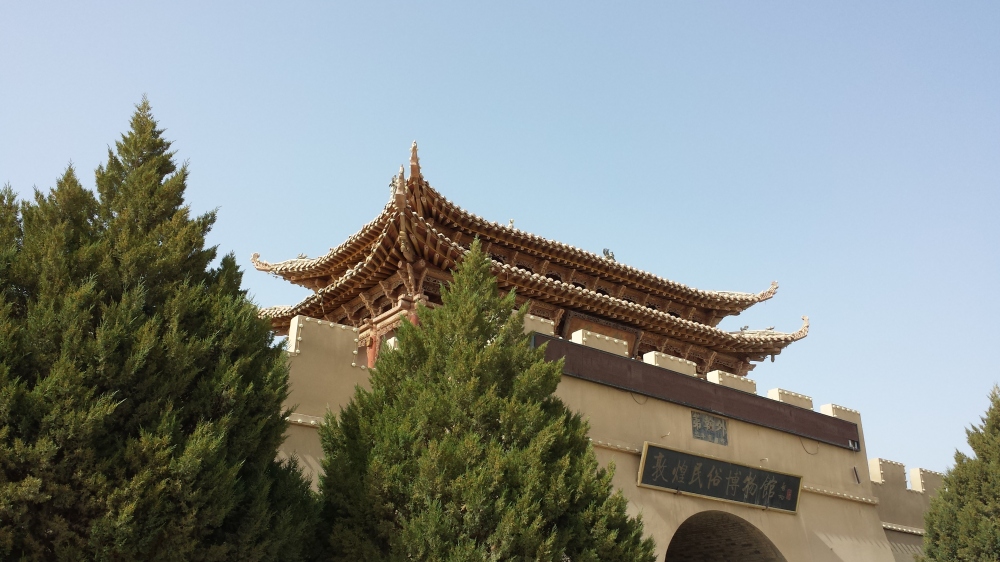 I was right.  It is busy.  But the area is big and there are a lot of activities : quads, paragliding tours, helicopter rides and of course the ever popular camel ride. It basically depends on your budget.  The pond is behind some dunes and out of view.  I see an endless trail of camels slowly walking into the desert in a never ending loop.   The trail goes left, away from the pond and goes up between the dunes for a kilometer or so, and than return.  I figure it takes a while at this pace, with not much to see.  Riding camels isn’t really my thing anyway.

In the distance I see a line of tourists climbing a huge dune for a better view. It’s like a row of ants from this distance. The park had the brilliant idea to provide shoe covers for the visitors to prevent your shoes from getting filled with sand. Than they had the not so brilliant idea to make them fluorescent orangey pink.  It looked like everybody was wearing life vests on their feet..  i am sure it has its purpose, but to me it kinda spoiled the atmosphere and it was nearly impossible to take a good picture without your attention being drawn away from the subject by fluo boots..

Ah well.. it is still a wondrous place and I wasn’t going to let that spoil mood.  I decide the best views must be from above, so i decide to take a short flight with the paraglider.  That sounded like fun.  But I am a bit nervous.  Its the first time and I am not so good with hights. Strange enough i love to fly.. There is a short wait until it’s my turn to get into the glider. 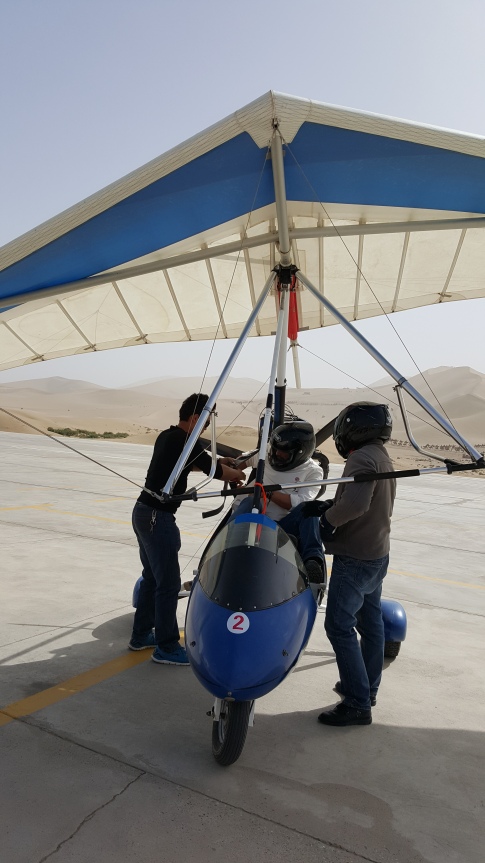 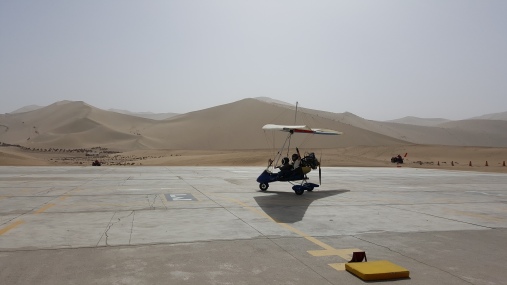 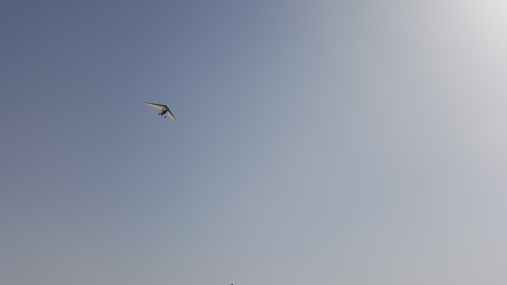 I get strapped in and its time for take off and a short tour around the site.  Of course the views of the desert and the dunes were fantastic, and the view of the ancient pond and  temple breathtaking. I had to hold on to my phone carefully and was wondering how many cellphones had already plummeted to earth.  Quite windy up there, and the noise of the engine behind me was deafening…  But the result is a great 3 min video from take off to landing that i will try to upload. Here a few shots i took from the original video. 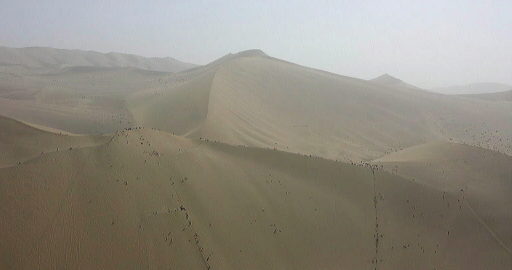 After the flight it is time to walk to the pond.  The view of the pond is fantastic as soon as you come around the big sandy dunes called ‘Mingsha Mountains’ or Singing Dunes.  Even with so many tourists. The sound they sometimes produce is triggered by the wind and shifting sands and a phenomena called ‘resonance’. 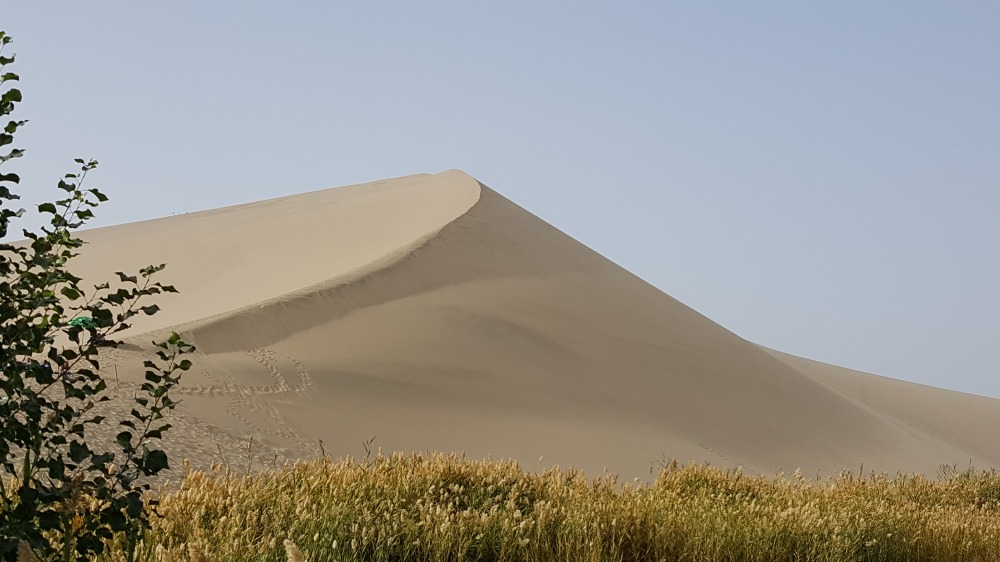 I walk down the pond and notice the lush vegetation around.  The pond is famous for a certain type of grass with medicinal properties.  Surpisingly the pond is up to 5 meter deep.

I walk around the pond as the beautiful pagoda reflects in the water of the pool. Nobody seems to be interested in the other side. But there are much fewer tourists and a little climb up a dune gives me the best picture of the pond. 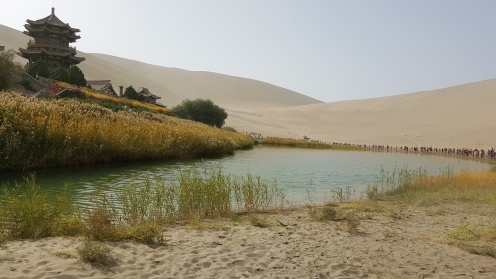 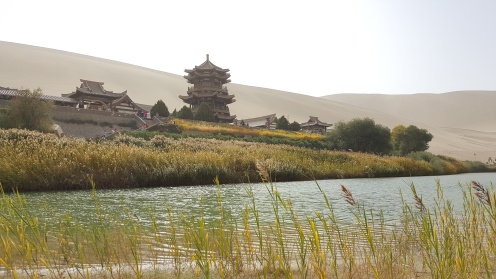 Time to visit the small temple with its gorgeous pagoda.   It is really a tiny oasis in the desert… 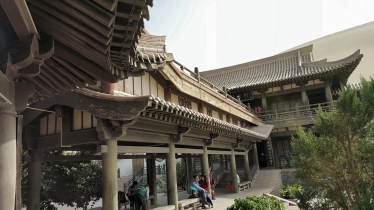 As a last feat of the day I also climb the huge dune many others also try to conquer.  It us quite steep and I neef to stay focussed even with the help of a rope ladder.

The tough climb is more than worth it with spectacular panoramas over the sand dunes of yhe Gobi desert and on the other side Dunhuang oasis.  Now you see how big it really is. 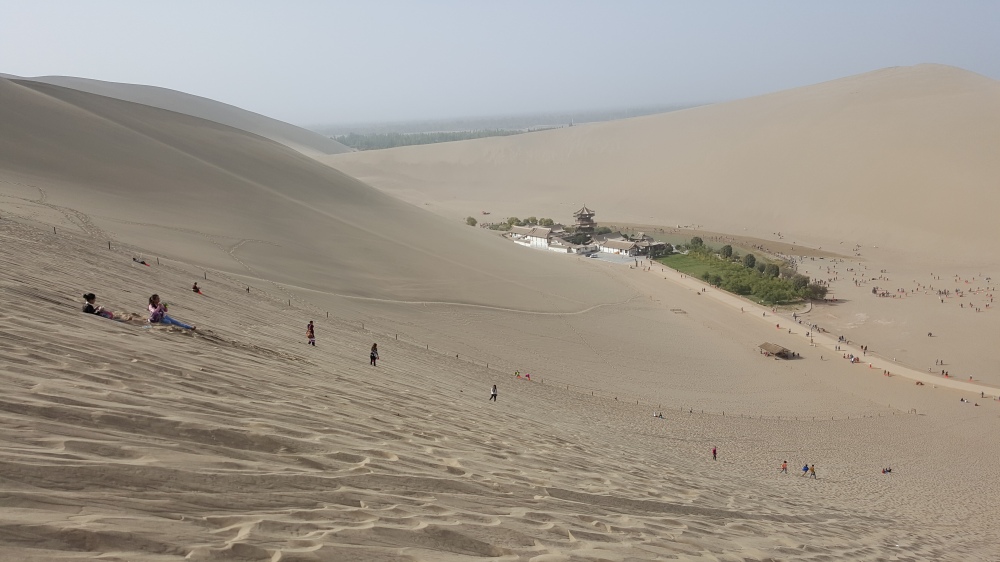 The going down is much faster and more fun. I run and fall a few times in the soft sand, but it left only sand in my shoes and a smile on my face..

Unfortunately I cannot stay for the sunset, because I have a train to catch to my next destination deeper into Gansu province hoping to discover more of China’s wonderful sceneries and rich culture.  But before I go i say goodbye to the magnificent ships of the desert that carry so many tourists between their bumps : the ever smiling camel. 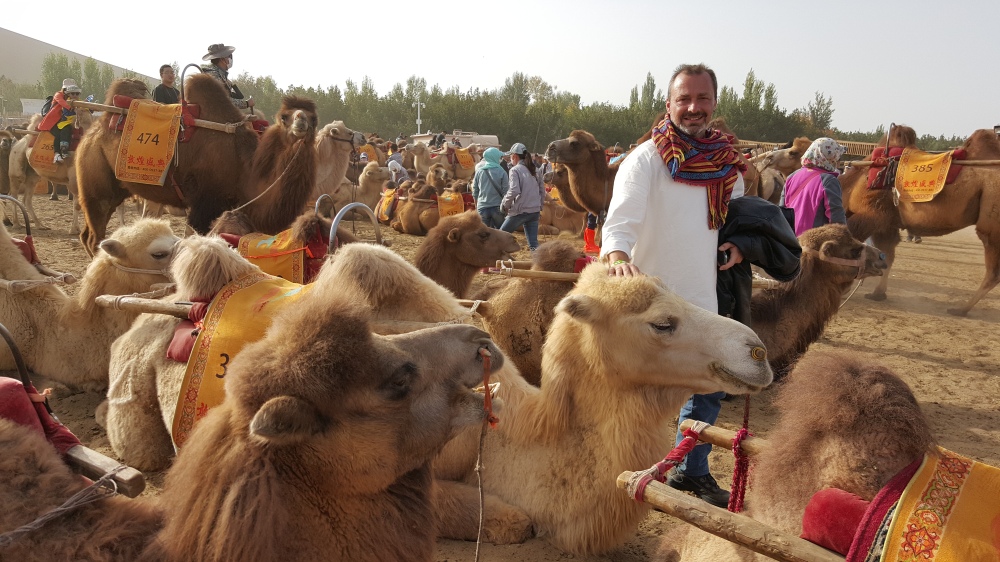